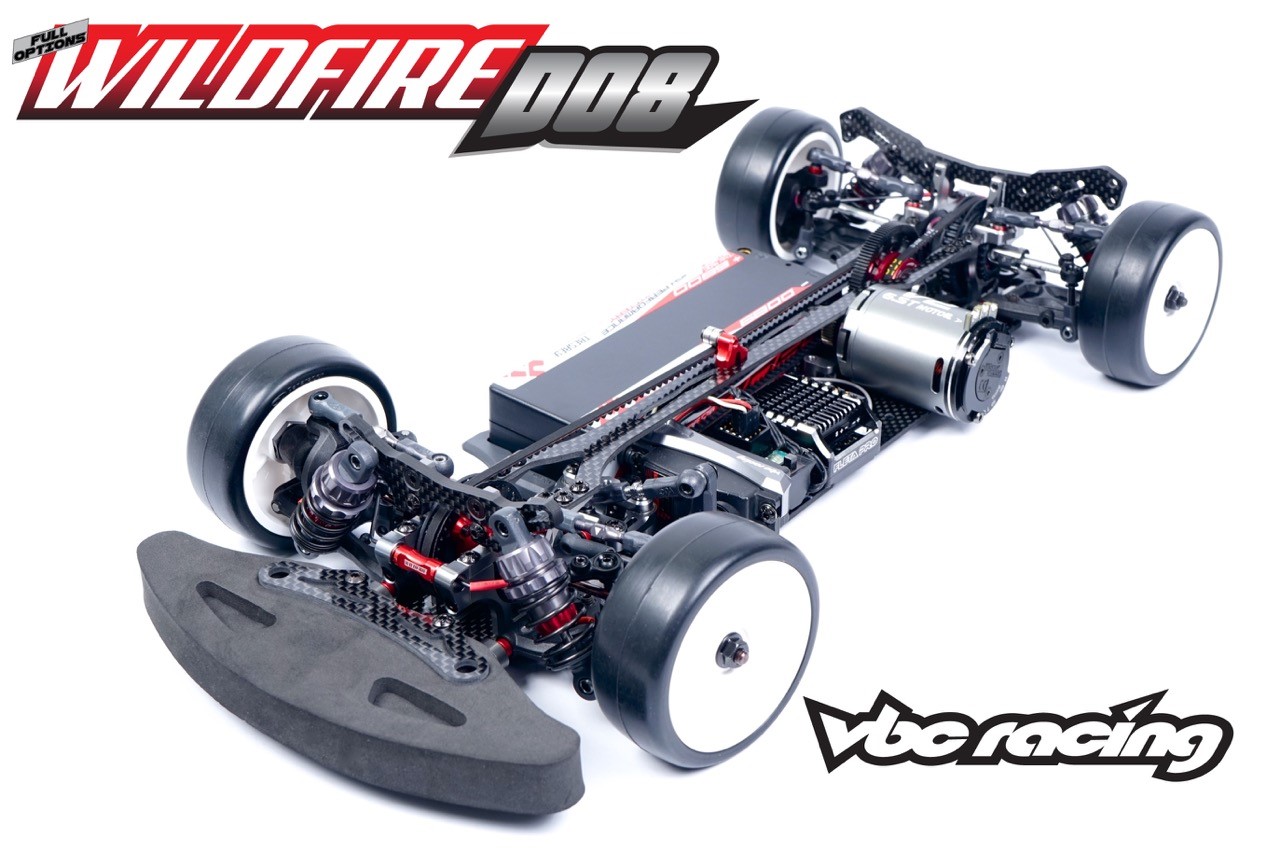 VBC Racing proudly introduces the latest evolution of the proven WildFire Touring Car. Following countless hours of designing and testing, VBC brings you the next generation, the WildFire D08.

Taking on the race-winning basis of the WildFire D07, VBC wanted to create something that is more versatile, durable and more importantly, fast. The proven geometry of the D07 lead VBC to focus more on the most critical aspects of a touring cars performance when developing the WildFire D08, such as flex, drivetrain, composite materials and finishing precision. Extensive testing has been undertaken at all types of tracks to ensure the Wildfire D08 will excel in performance, requiring minimal setup changes across all track surfaces and conditions. VBC brings you a car, which is more refined, more competitive and more durable than its competitors, – straight out of the box. 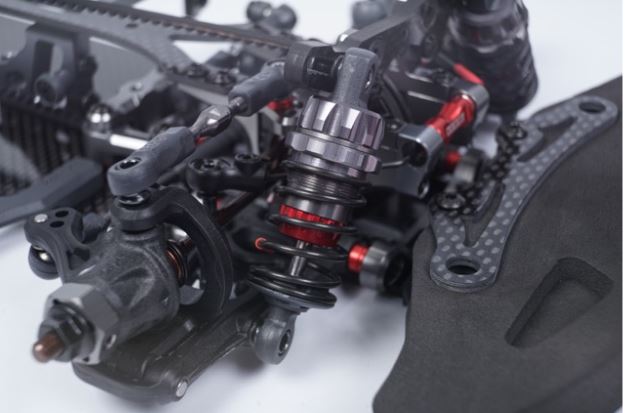 The low center of gravity is a trademark of the Wildfire D08’s Predecessor, the D07. This one aspect has countless times out – performed the traditional platform. The pivotal aspect of this being the True Big Bore (TBB) Shocks.

With the same volume as a regular shock and the characteristics of the larger diameter piston, the shorter stroke of the TBB shocks provides the car with ample stability whilst also providing that initial aggression and turn – in which is characteristic of a fast car. TBB shocks are compatible with a large range of long and short springs, making them the ideal solution.
This was one critical aspect that VBC carried forward to the new Wildfire D08, and the kit will include Orange front and Red rear TBB Shock Springs. 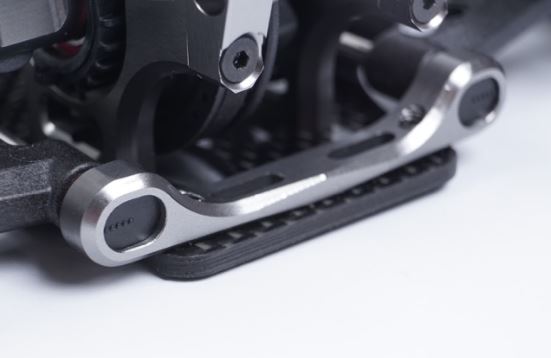 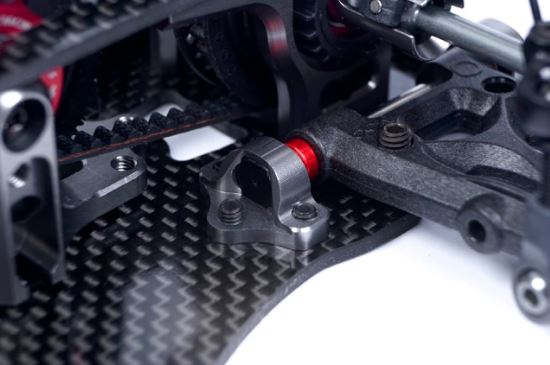 The demands of modern day touring car racing have led to an increased necessity for adjustability. The Wildfire D08 demonstrates a simple, yet effective way of achieving any wheelbase, toe-in or arm sweep setting. With both the split and solid suspension mounts sporting this new feature, changes can be made quickly and easily. Fine-tuning these aspects of the car is of utmost importance; hence, we have designed the inserts in 0.25 deg increments.

Roll center adjustments are made by using optional graphite shims under solid and split blocks. Durability is increased due to the steel ball inserting into plastic instead of alloy. The wear on this feature is non existent and results in a slop-free, perfectly pivoting suspension arm. The kit includes 5 different positions to suit all desired rear toe and front arm sweep setups. 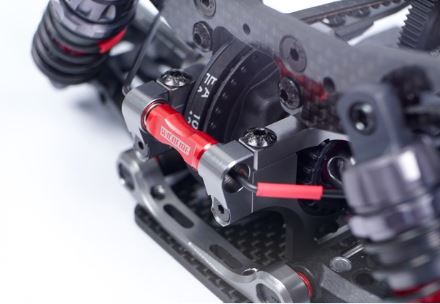 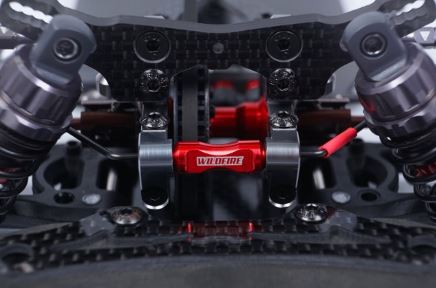 One of the most critical features of a touring car has now been made a whole lot easier thanks to the Wildfire D08’s new ball raced anti-roll bar system. Nothing requires the precision fitment and setup like an anti-roll bar, so it is crucial the whole system embraces minimal slop and maximum simplicity. The ball bearings and carriers attached on each bulkhead make tweaking and changing anti roll bars easier than ever. The new Anti-Roll Bar carrier consists of 2 grub screws, ensuring the bar stays perfectly square at all times.
The Wildfire D08 also sports the conveniently adjustable Anti-Roll bar links featured on the Wildfire D07. 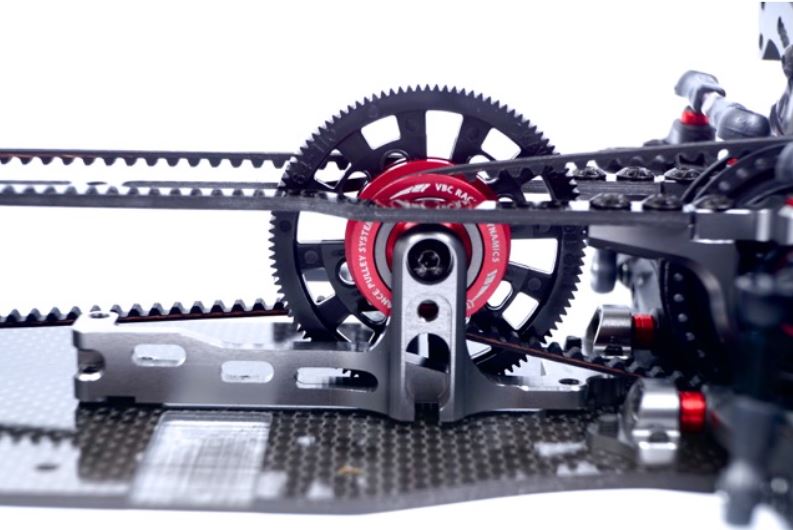 The Wildfire D08 embodies the proven motor mount layout seen in the Wildfire D07, and takes it to a completely new level. Designed around providing the most symmetrical flex possible, the Wildfire D08 motor mount also sports a lower center of gravity, lowering the entire lay shaft assembly. Modern day touring cars revolve around flex; this is why we have ensured that the Wildfire D08 will offer a vast range of flex settings for both the chassis and top deck. 2 types of optional top deck mounting posts are available for the Wildfire D08, giving a industry leading 3 different motor mount – top deck flex configurations. The revolutionary lay shaft and Zero Tolerance Pulley System remains unchanged, however the kit will now include the latest 64p Kawada Japan SUPER – EX Spur gear.
Possibly one of the smallest details, yet one of the most innovative features is the fan wire routing inbuilt into the motor mount. Best combined with the Wildfire D07/D08’s unrivalled adjustable fan mount, the wire for the fan can be routed internally through the motor bulkhead, meaning no messy wires, and no jamming wires under the motor. This is a very simple alternative to a normally very daunting process. 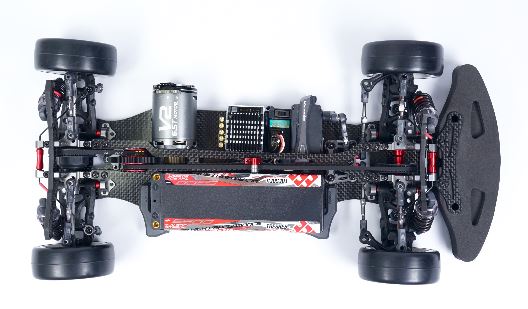 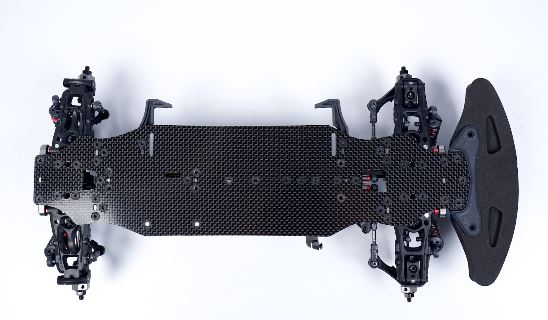 The Wildfire D08 builds off a successful chassis and top deck shape seen in the Wildfire D07. However, some critical testing has shown that we can get even more out of this platform. Through countless chassis design ideas, we have developed a chassis like nothing seen before. By removing the cutouts for the front and rear pulleys, we have managed to create a more balanced flex and driving feeling, whilst keeping belts and pulleys away from dirt and rocks. The symmetrical, strategically placed cutouts provide the chassis with flex where it is required most for maximum corner speed. The cutouts are strategically positioned right under where the topdeck mounts to the bulkheads, changing the flex points of the car.

The flex configuration of this car revolves around providing maximum flex at the bulkheads, creating a car which flexes throughout, not only in the center of the chassis, which we have found to increase corner speed dramatically.

The kit comes with a 2.25mm chassis, which has proven to be the most versatile option on all track surfaces and conditions. The kit comes standard with D08 front graphite bumper top plate. The top deck shape remains relatively unchanged, while we have also decided to keep the proven 2mm thickness. New to this section of the car is a lightweight aluminum, red belt tensioner. 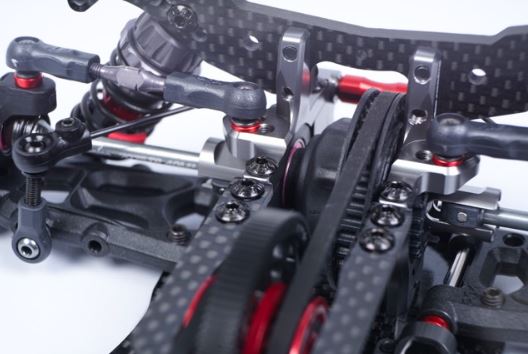 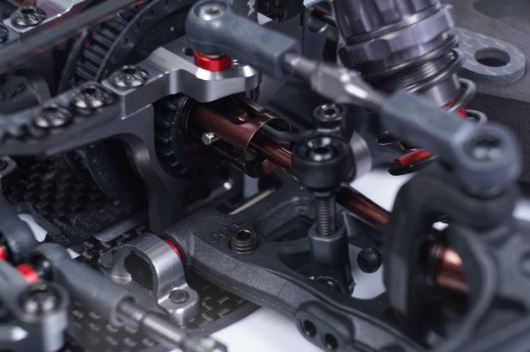 The Wildfire D08 features an entirely new bulkhead design. The lower bulkheads have been simplified, and mounted more centrally. The all-new 7075 T6 bulkheads are 3mm closer together, and provide the car with more centralized weight distribution, leading to improved balance and increased overall traction. This feature is one of the biggest changes on the new platform, providing the car with completely new flex characteristics and a weight distribution, which is more central than ever. Because of this, the upper bulkheads have also been re-engineered so that 4 different camber link lengths can be used to provide further tuning options.
Whilst this has all been changed, the spool and diff wifth remains unchanged, so all spool and diff components from the Wildfire D07 are a direct fit into the Wildfire D08. 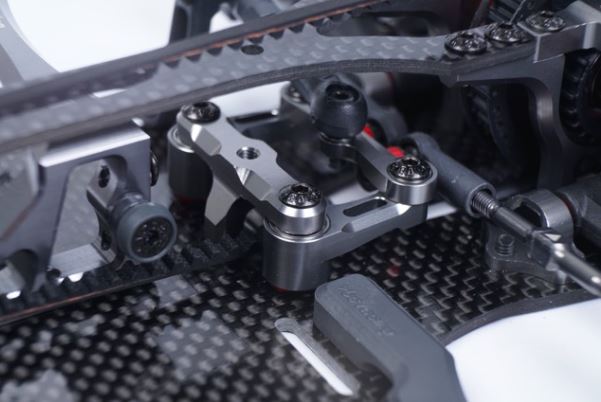 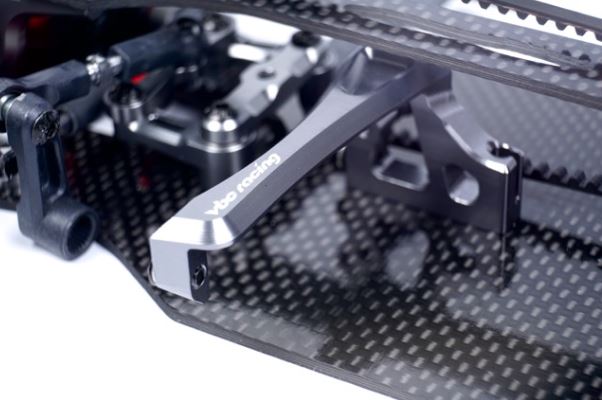 The Wildfire D08 sports the industry’s first floating steering bell crank system seen in the Wildfire D07. The perfection of this system was evident, and we have decided to leave this feature the same, as it is tweak free and the perfect solution to a precise, tunable steering bell crank system. Also carrying over, is the flawless 7075 T6 Floating Servo Mount. A feature that has proven to be outstanding ever since the idea was introduced on the Wildfire D06. This lightweight design provides the servo with a solid, tweak free mount. Secured by three countersunk screws into the chassis, you can be sure nothing is moving anywhere! 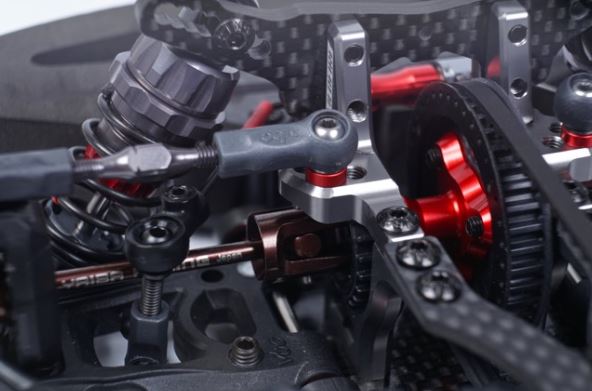 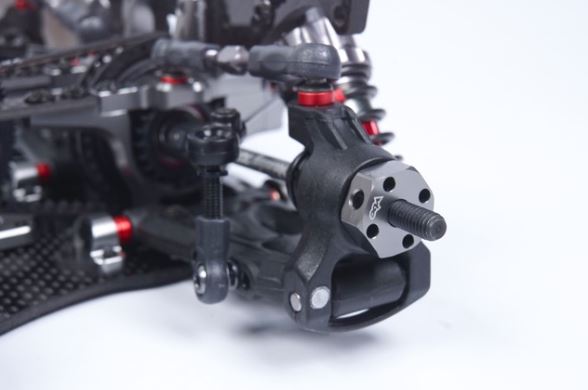 Many big improvements have been made to the Wildfire D08 drivetrain. The kit comes standard with Yaiba Racing 52mm Spring Steel Double Jointed Universals, Red anodized 7075 T6 Spool, Steel front spool outdrives and 7075 T6 49mm Rear Driveshaft’s. No expense is spared in ensuring the WildfireD08 drivetrain is irrefutably durable and precise. The rotating mass has also been decreased by the new 7075 T6 Lightweight wheel hexes for the front and rear, as well as new, even lighter 707 5 T6 rear diff outdrives. This whole drivetrain package ensures a precision lower rotating mass for increased acceleration and stability, as well as less wear on components and bearings. The Wildfire D08 incorporates the same diff and spool as its predecessor. 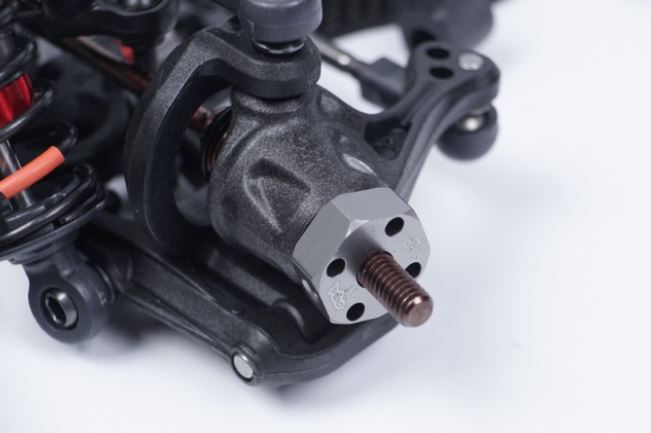 The Wildfire D08 features an all-new, more durable compound of plastic components. The new Composite X (Silver) compound provides for a more predictable car, with more corner speed and stability. The new composite material is black in appearance and can be identified by a silver dot. Upon testing many different compounds, we found that the Composite (X Silver) was the most consistent between tracks – providing enough traction on low grip, and enough stability on high grip. We also found the durability of this plastic exceeded all previous composites. VBC are also introducing a Composite X (Gold Compound), which will be available as an option part. This plastic is a stiffer material and is recommended for use on high traction tracks. 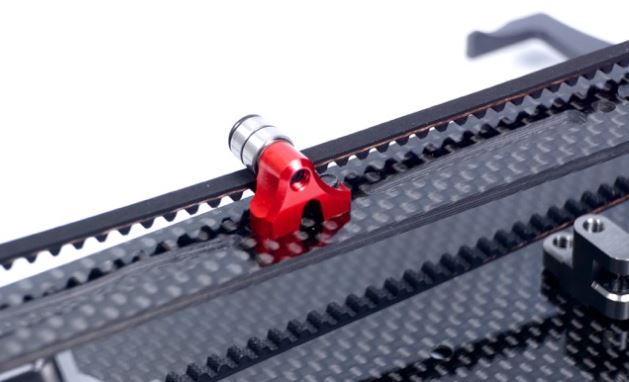 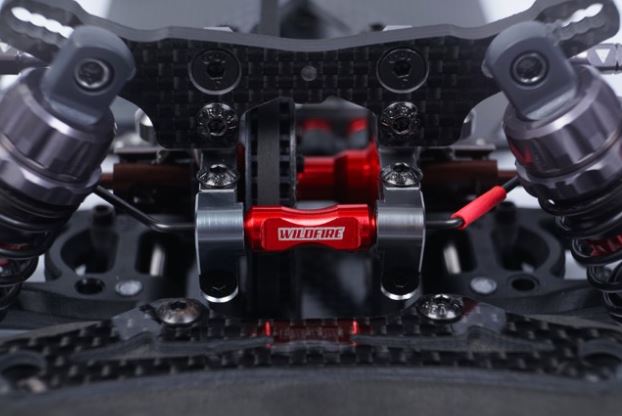 The finishing touches on the Wildfire D08 mean that you have to buy less, the kit includes all Red Anodized T1 and T2 shims throughout the whole car, as well as the latest sleek design carbon bumper mount. With so many parts that were previously considered upgrades on the Wildfire D07 included in the box of the Wildfire D08, it is arguably the best value car on the market.