This is an advanced an innovative car from Yokomo, this drift car combines the best of what Yokomo has to offer! The new RWD drift car MD 1.0, carries the title -“Master Drift” and are an high-end machine that incorporates the functions and structure required for drift driving. From the drive-train to the suspension, the MD 1.0 has been designed to meet the demands of drift experts.

Graphite suspension arms, the first ever used in a drift car, symbolize the MD 1.0’s racing machine concept, and the suspended suspension system offers significant advantages for drift cars. Despite its simple shape, the suspension alignment allows for greater freedom in setting up the car’s width, skid angle, and roll center.

The drive-train is high-precision design held in place by an aluminum bulkhead. The kit comes standard with a positive-torque 3-gear transmission, but by adding a counter gear and re configuring it, a 4-gear anti-torque version can be used, allowing the traction balance to be set according to the driving style.

Despite its slim and simple appearance, the MD 1.0 is a true racing drift machine with a wide range of options, from chassis rigidity balance to design, making it the ultimate product designed for the most discerning drifting experts. 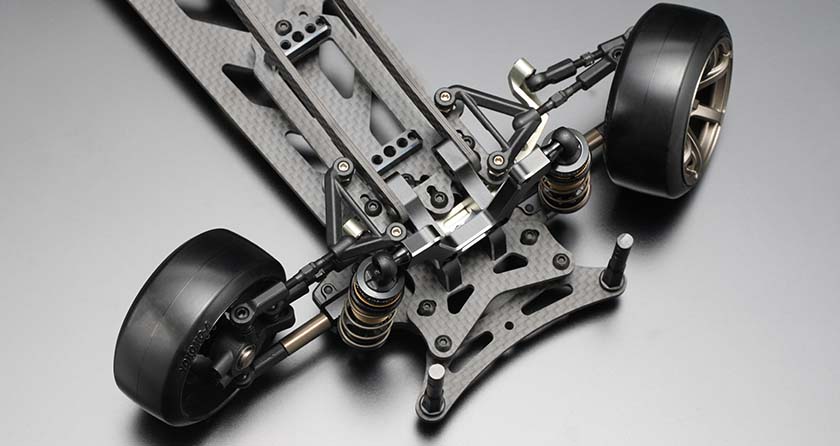 The front area has been designed with a focus on weight reduction by narrowing down the adjustment points to the minimum necessary while increasing rigidity and accuracy. By minimizing overhang weight, careless understeer is prevented. 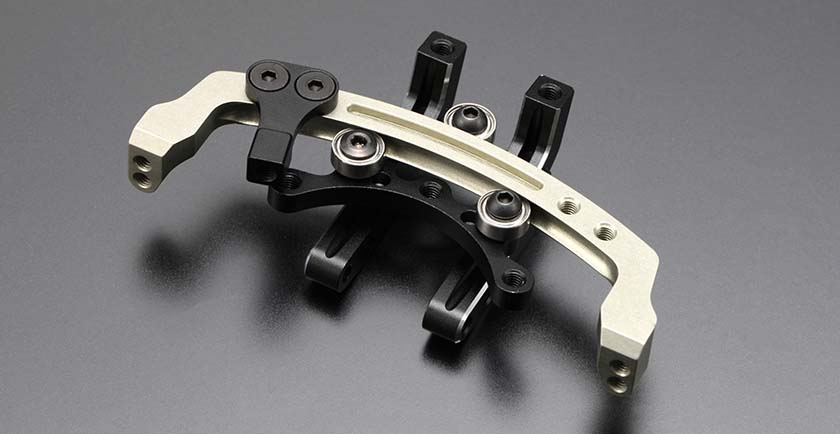 Around the slide rack, which has achieved a significant weight reduction compared to the conventional model. The bulkhead and base are integrated into a thin slide rack that supports 3 bearings, which greatly contributes to weight reduction around the front. 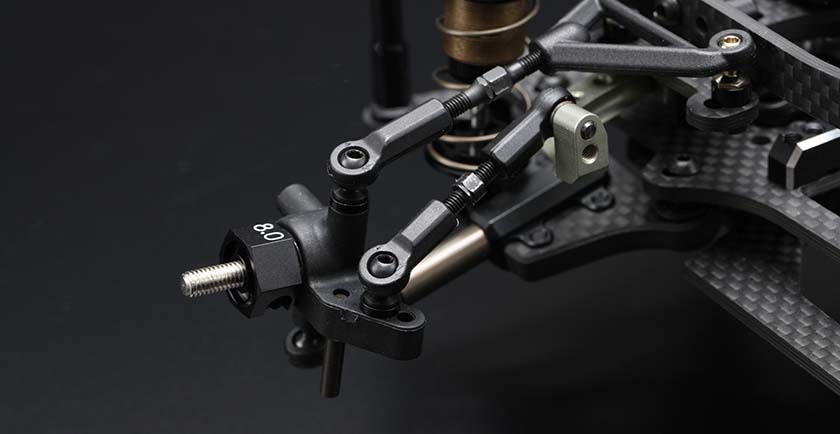 The steering block and lower rod are the same parts as before. It is possible to reproduce the highly reliable Ackermann ratio.

The front and rear suspension arms are based on 5mm thick graphite. Compared to resin, it is resistant to temperature changes and can maintain its rigidity regardless of the season. In addition, the pivot position of the suspension arm and damper also has the effect of a gull arm, allowing the suspension to move smoothly and roll smoothly. 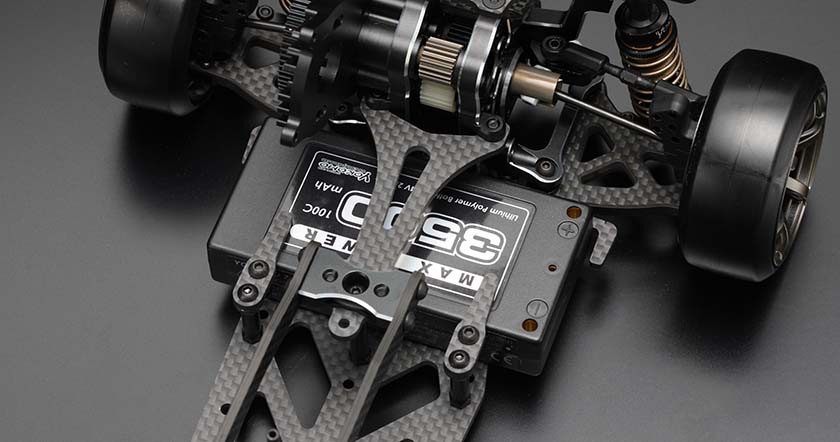 The battery is designed exclusively for short Li-po. It is mounted at the rear end of the chassis with a simple holder. A vertical battery holder is also planned to be released as a separate option.

Adopts a vertical upper deck that can bring out the softness of the roll while increasing the pitching rigidity. 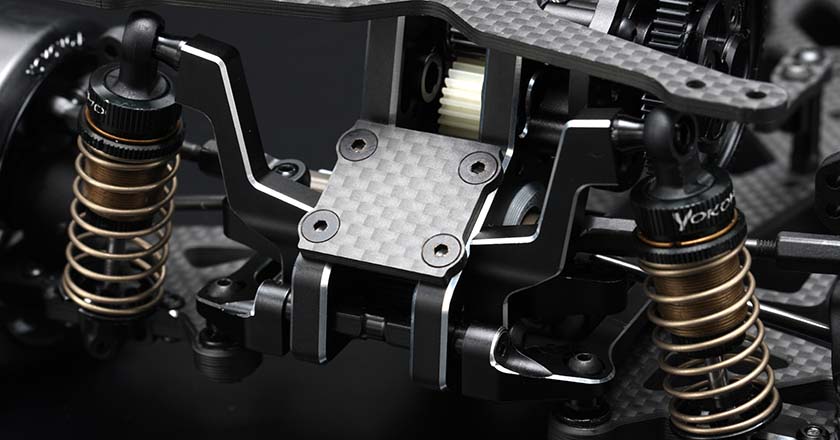 A graphite rear ESC mount is also standard equipment. It is also a part that increases the rigidity of the rear bulkhead, and is installed between the shock towers to minimize overhang weight. 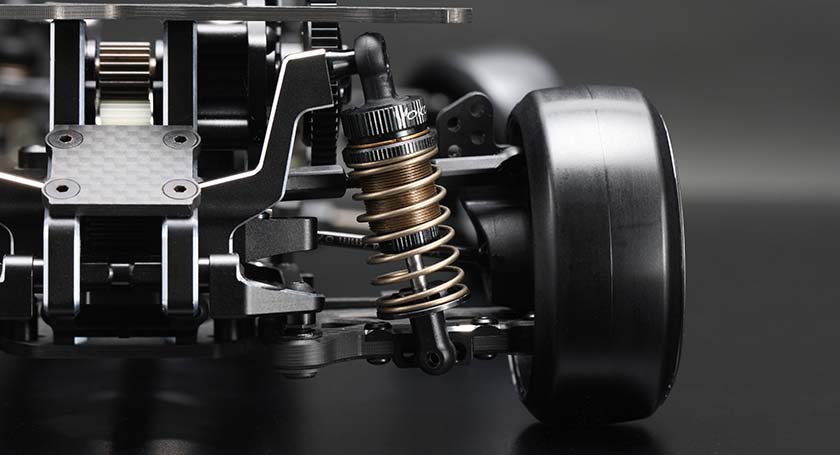 The suspension arm is suspended from the bulkhead, allowing the roll center to be lowered as much as possible. It is also possible to change the width of the vehicle, adjust the skid angle, and adjust the angle of the damper.

The aluminum high-precision rear bulkhead stands out for its lightness of drive. The standard is a 3-gear specification, but by adding an idler gear and changing its position, it can also be used as an anti-torque 4-gear transmission. 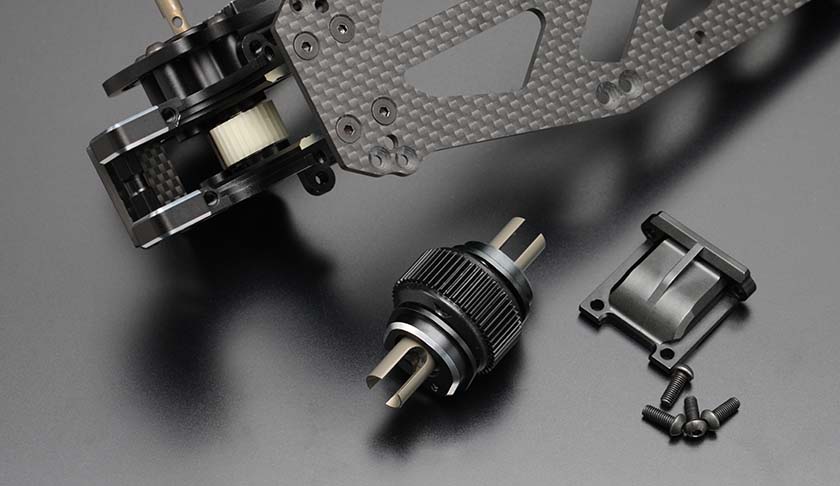 The differential can be accessed by simply removing the cap at the bottom of the rear bulkhead. It is designed to increase work efficiency even when replacing the gear differential or performing maintenance on the ball differential. It has a structure that allows you to change the height of the differential by changing the aluminum adapter that holds the differential and adjust the rear traction. 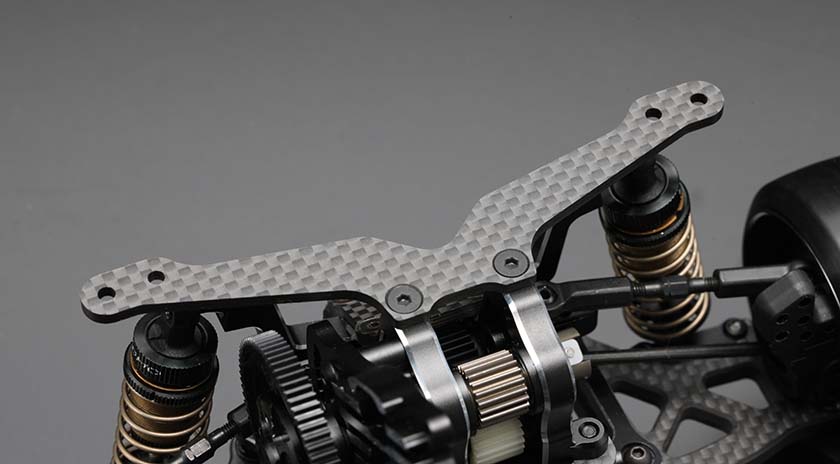 What you need to run the assembly kit

The kit does not include body, wheels, tires, motor, batteries, pinion gear, and other R/C electrics.